Today was a day I was rendered speechless as a parent. Thanks, in all parts, to a Walmart Santa.

The day started with two items on the agenda: 1. Driving an hour away to see a famous Christmas light display and 2. See Santa. Now, there was a Santa scheduled to appear at the Christmas light show, but after a quick search on their website I discovered Santa was quite the swindler. I mean, $20 for a picture? That’s one picture. They had packages on their topping $60-$100 dollars. Santa better have his bag o’ tricks stuffed with more than a germy lap for those prices.

Maybe I am just spoiled. Last year, when we lived on the West Coast we had a glorious experience with a FREE Santa. This Santa’s birth certificate said Jolly Old Saint Nicholas, for sure. The urge for me to curl into his lap and whisper wishes of naps and free boob lifts was cataclysmic. He was the real deal. The photographer was a professional. There was warm milk and cookies. It WAS The North Pole.

Now, the kids look like I just slapped them in a weird man’s lap, but if you look past that you can see this Santa is no joke.

Let’s get back to today…

I was not about to drop a hundred to get a snapshot of my kids looking weirded out in anyone’s lap, no matter how authentic their garb and personal aura. So, I Googled “free Santa” and found, miracle of all miracles, there was to be one this very day at the local Walmart! Now, with hindsight being 20/20, I should have preemptively known that Walmart Santa was really never going to live up to the sugar plum fairies dancing in my head, but I was too far gone. We were going to see Walmart Santa.

I quickly got the kids in complimentary Christmas-colored clothing, put ribbons in hair, made them actually bath in fear the camera will pick up dirt rings and we were off. We pulled into Walmart and eagerly darted inside. My first “sign” of things being less than authentic could have been the handwritten, half-warped sign at the door claiming Santa was inside for free. But, hey, I am not Princess Diana. I can redneck with the best of the Walmart Santas. I am not above Walmart Santas.

The sign, as eye-catching as it was, did not say where Santa’s over-sized arse was located in the Super Walmart. He was just there…somewhere. As we dove into the packs of Walmart shoppers I flagged down an employee.

“Hi, could you tell me where Santa is?” I asked.

She looked at me like I asked where they kept their live ponies. Her stare continued for five to ten grueling seconds when she pointed to lawn and garden. Hmmm…not as romantic as the North Pole, but, again, I am trying to embrace this situation.

As we stroll up to Lawn and Garden, I am expecting a line clear to the grocery section. I mean, free Santa at Walmart just screams mass chaos. But, no, we walked right in and right to the front of the line.

As I’m quickly stripping the coats off the kids I’m catching glances over to ol’ Father Christmas and wondering if this is a small Asian man with a fake beard and a tremendous amount of stuffing packed into his velour ensemble. I’m not above an Asian Santa — so I quickly usher the kids onto the bench next to Santa and take in the full picture. 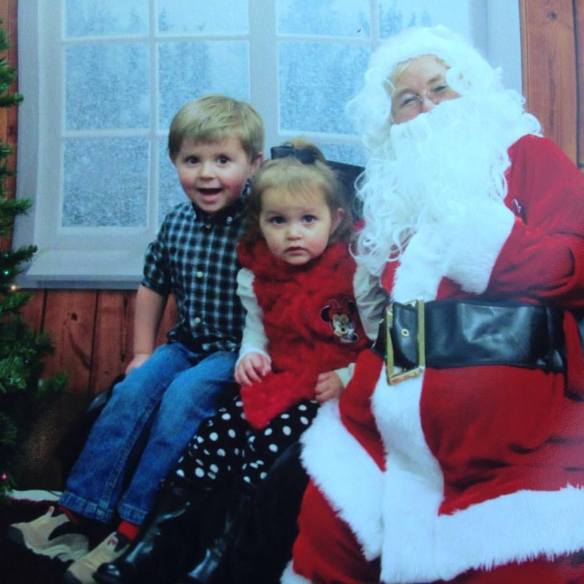 My daughter’s face says it all.

Yes. This was a woman. Not even a more masculine woman. This was a tiny, butterfly of a woman packed into a Santa suit with a voice as frail and feminine as my grandmother.

So, I just played along. What else could I do? I had to force this farce down my children’s throats because there was no turning back. We were in too far.

This female imposter was the sweetest woman. She would have made a great Mrs. Claus. But, the more she talked, the more questions I could see dancing across my son’s face. After we wrapped up, my son (who is three, by the way, I don’t know who you think you’re fooling, Walmart) asked me, “Mom? Why does Mrs. Claus have a beard? Where’s Mister Claus? Why was Mrs. Claus in his clothes?”

“She just let herself go a little bit this year, honey. But, don’t worry, she’s going to tell Santa exactly what you want.”

So, now my kids think Mrs. Claus is a transvestite and have the photograph to prove it. I feel like this might come up in a future therapy session.

6 thoughts on “Tranny Claus: The Tale of the Cross-Dressing Santa”